Madison Buffalo Jump State Park has all the major topographic elements of a jump site, along with some old formations that give you a sense of the cultures that used this hunting method. At the base of the cliff, where tons of bones remain buried, archeologists have discovered the tepee rings of a large town.

It is easy to imagine the incredible events that took place here during a drive: the roaring stampede, the spectacular scenery of the fall, and the events that followed.

Short treks around Madison Buffalo Jump State Park offer greater insight into the indigenous culture as well as breathtaking views of the valley below. The per-vehicle day use price is $5.

Native Americans used this tall limestone bluff on the rim of a large valley formed by the Madison River for 2,000 years. It allowed them to herd vast herds of bison off this massive semicircular cliff for food, clothing, shelter, and supplies.

Skillful young men known as ‘runners’ drew bison to the cliff or ‘pishkun’. It was their only source of income. After the introduction of horses in 1700, this jump was abandoned. The rugged outcropping today reminds us of the region’s early inhabitants.

Museum of the Rockies (MOR)

Smithsonian Affiliate and world-class research and history museum, Montana State University’s Museum of the Rockies is located in Bozeman. Although most known for its dinosaur fossils collection and permanent regional history exhibitions, the Museum of the Rockies also attracts visitors with changing exhibits from all over the world.

The museum’s collections span more than 500 million years and center on the cultural and physical history of the Rocky Mountains.

It has the Martin Children’s Discovery Center and the Living History Farm – which is a historically accurate working 1890s Montana homestead accessible every summer.It also houses the Taylor Planetarium, which is equipped with a state-of-the-art digital projection system, among other things.

Located at the southwest corner of Main and Cedar in downtown Three Forks, the Headwaters Heritage Museum and Gift Shoppe are housed in a bank building constructed in 1910 that was formerly home to the Three Valleys State Bank of Montana. The structure is listed as a historic landmark on the National Register of Historic Places.

Since its establishment in July of 1982, the Three Forks Area Historical Society has housed a significant and unique collection of artifacts from the Missouri River Headwaters region.

Upstairs, the presence of an old-fashioned kitchen, schoolroom, beauty shop, dress, and millinery shop, dental office, and tool room transport you back in time.

The Milwaukee Railroad established Three Forks in 1908, and the station agent’s office is loaded with relics from that era. A military room honors the service of the residents of this region who have served the country.

This is the very first fishing and picnicking place on the Madison created specifically for people with disabilities, and it can be found at the mouth of the canyon. A hiking track runs the length of the canyon alongside the river, but it is inaccessible from the south.

Visitors to the Bear Trap National Recreation Trail near the north end of the canyon can enjoy backpacking, trekking, and horseback riding into the valley. Along this stretch of the river, trout fishing is very popular.

At Madison Buffalo Jump State Park, you will find a variety of interesting pathways to explore. The paths are accessible by foot or bicycle. Spring arrives earlier in the park than in the surrounding areas, which means that it heats and dries up faster. Hence, you will see a lot of people on the trails in the spring.

As the season continues, temperatures rise and humidity decreases, making it less appealing to be outside. A lot of the trails are not very long, but they can be combined to make a bunch of different hikes.

Visiting Madison Buffalo Jump State Park is a terrific way for families and students to learn about the history of Native Americans in the area while having a fun day outdoors.

As you ascend the short but steep trail to the plateau’s summit, you can’t help but picture how it must have looked centuries ago, when bison grazed openly. In addition, there is a trail that traverses the plateau’s rim, allowing you to take in breathtaking views from every angle.

A breathtaking view of Madison Valley awaits those that reach the summit. It is also a great spot to see the setting sun with the Madison range in the background.

Equestrian use has been a part of Montana’s culture for a long time. Equestrian transport has been an important part of the local economy since the earliest days of settlement and continues to this day. The technique of ranching and logging with livestock was common in rural areas in the past.

Every day, horses and mules were needed for delivery of mail and roving “circuit rider” magistrates and preachers. A favorite recreational activity in Madison Buffalo Jump State Park is horseback riding, which provides tourists with access to many of the park’s picturesque and historical attractions.

Montana is full of magnificent wildlife, big and little. Throughout its gorgeous natural landscapes, there is a wide variety and richness of wildlife habitats. This state park takes you to the scene of an event that carries historic and cultural significance for the state.

The sites where the warriors swarmed the herds over the abyss, where the bison collapsed, and where the Native American women toiled to retrieve the meat, skins, and bones are marked with interpretive placards.

You can imagine the “runner,” whose mission was to harass the bison and lead them to the cliff’s edge. When the large animals converged on him, he would dive over the ledge and take cover in a crevice. You can see the rock under which he was hiding. 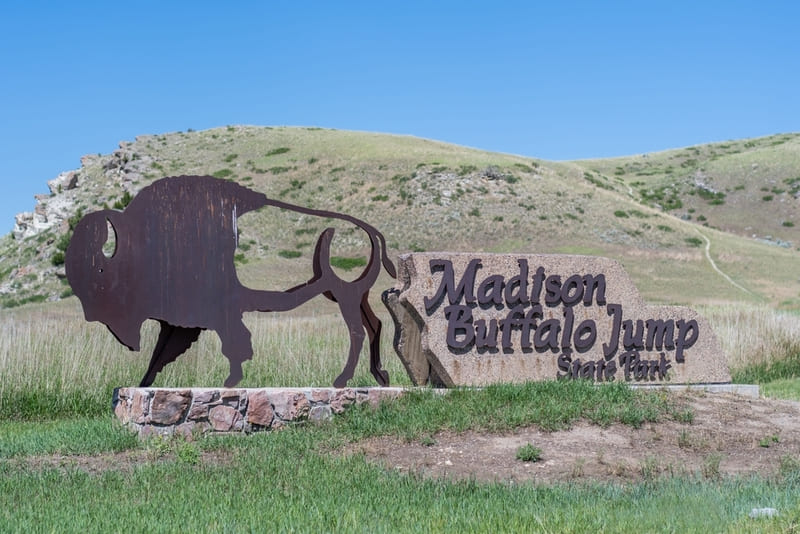 The Madison Buffalo Jump State Park Loop is a 5.8 kilometer, moderately trafficked loop path located in Three Forks, Montana, which provides an opportunity to watch wildlife and is suitable for all levels of experience. On this trail, you can enjoy a variety of outdoor activities like hiking, running, and just taking a stroll through nature.

A 3.4 kilometer, lightly trafficked loop path near Three Forks, Montana, Madison Buffalo Jump State Park Inner Loop gives opportunities to see wildlife and is suitable for hikers of all levels. Hiking and snowshoeing are the primary uses of this trail.

Dogs are welcome on this trail, but they must be on a leash at all times.