The First Peoples Buffalo Jump State Park and National Historic Landmark is an archaeological site where you can find possibly the largest bison cliff jump in North America.

The State Park is closest to the small Montana town of Ulm, just to the west of Great Falls in Cascade County. You can access the site about 10 miles south of Great Falls after taking the Ulm exit from Highway L-15.

In the region of this former bison jump, the Native Indians had been making good use of the land for more than a thousand years before the arrival of explorers like Lewis and Clark. The state park contains what is considered by archaeology’s finest as one of ‘the most significant buffalo jumps in the world’.

The site was previously known as Ulm Pishkin, and evidence in the archaeology field points to the fact that this could well have been the most-used buffalo jump across the entire globe.

The actual point of the bison jump is located along a mile-long sandstone cliff which has various indicators and remnants of drive lines along it.

Bison meat was a staple part of the Native American diet in this part of the woods. The Native Tribes would literally stampede herds of bison off the cliff and collect the remains below. This was a method of trapping and hunting animals for food that was devised in accordance with the land and environment.

A buffalo drive could start as far as a mile away with the herding of the animals. It was not the most common hunting method but effective judging from the compacted remains of the buffaloes down below. 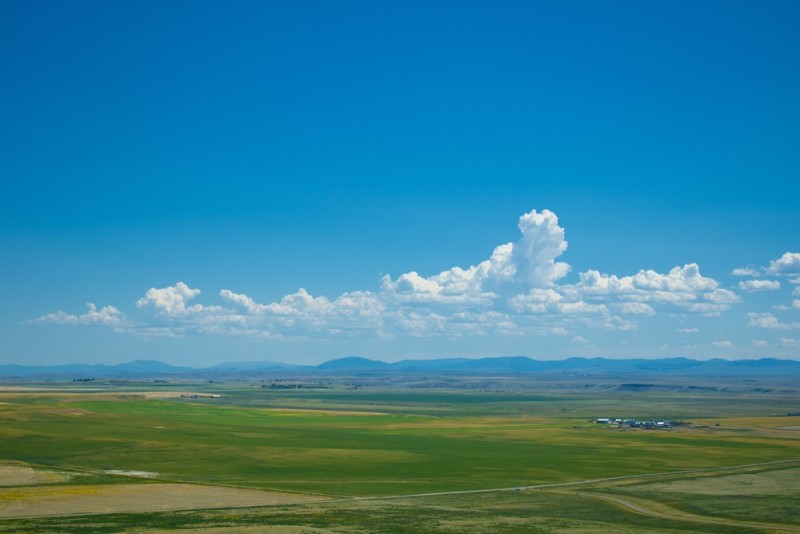 To put that into perspective, we might consider that the park’s original name — Ulm Pishkin– was apparently derived from the Blackfeet word “Pis’kun,” literally meaning “deep kettle of blood”. The cliff ranges from 30 to 50 feet in height, the perfect height to ensure that you still get some meat worth eating after running the bison off a cliff.

Although there are more than 300 buffalo jump locations in Montana, First Peoples is one of only three that are protected. It was listed in the National Register of Historic Places in the 1970s and when the visitor center opened in the late 90s the park changed its name, becoming a listed state park soon after.

This is the place to come to find out more about prehistoric life on the plains in hunter-gatherer times when a few million buffalo roamed around these regions.

The park has an interpretive trail and picnic areas with tables, and the top of the jump provides some impressive panoramic views of the Rocky Mountain Front, including the Missouri River valley and its accompanying High Plains setting.

This is a day-use-only park featuring both indoor and outdoor attractions by way of a visitor center, a hiking trail, and wildlife viewing. Non-resident day use fees of $8 with a vehicle and $4 fee as a walk-in, bicycle, or bus passenger.

The visitor center and its immediate vicinity are one of the main points of attraction within the First Peoples Buffalo Jump state park. You can walk the interpretive trails from the center, access the hiking trail, and see various historical aspects of the park such as Tipi rings in the same spots they would have been thousands of years back.

The educational visitor center at the bottom of the jump is 6,000 square feet in size and contains various exhibits related to history and heritage, an interpretive gallery, a classroom, a bookstore and gift shop, and a storytelling circle. Outside of it, there is an amphitheater and traditional games arena. You’ll also find the public toilets located here too.

The center is open daily in summer between 8 am and 6 pm from April to September, and in winter the hours are slightly more restricted to Wednesday through Sunday between 12 pm and 4 pm from September to March.

This is a fairly wide and expansive open space that allows you to hike the trails, do a bit of picnicking, spot some wildlife or birds, take some decent snapshots, and even participate in some bow hunting in some areas according to availability.

The sandstone cliffs can be accessed by the trail from the top and the bottom, and serve as a prime spot to do a bit of birding from. It’s not uncommon for watchers to spot soaring raptors and nesting cliff swallows, and western meadowlarks permeate the grasslands.

The best chances of spotting migratory birds come around mid-May through mid-July, although some birds are often still around as late as September.

Birders with a keen eye may be able to spot rock wren along the cliffs, or maybe some burrowing owl around the region of the prairie dog town.

Reports of long-billed curlew and grasshopper sparrow from the prairie below are common, as are those of various hawks, golden eagles, and short-eared owls – not to mention the occasional gray partridge or sharp-tailed grouse.

There is only one major trail in the immediate vicinity of the visitor center, although there are various other unnamed trails further out from the First Peoples Buffalo Jump state park.

The 3-mile long Taft Hill Loop is the primary trail in the state park. It is usually fairly light in traffic, and is in the immediate vicinity of the visitor center.

It can be approached from two different levels, the lower with the more amenities of the two. This is an easy route ideal for all skill levels. The trail offers a number of activity options like wildlife viewing and is also popular with birders.

The loop is a trail that starts out the visitor center and allows you to bring your dogs along if they are kept on a leash. You will encounter a fairly steep slope at either end of the Buffalo Jump, but several switchbacks make them easier.

Apparently, snakes are common on this trail, as are great views and opportunities for learning about the region from the interpretive signs scattered along the route.

The trail is well-maintained and clearly marked. It has mainly smooth dirt and grass paths with spots of gravel, and while it doesn’t necessarily offer the typical scenery of a Montana hike, the views are still impressive.

If you fancy a look at some other nearby trails you can find a couple more options near Belt, around an hour away from the state park. There are various Sluice Boxes routes including the Sluice Box Loop, a well-traveled, one-mile loop trail rated as moderate.

This trail is primarily used for hiking and snowshoeing in the winter and includes a few water crossings.

The Sluice Boxes Trail is a bit further out and is a moderate, rather more heavily-trafficked out and back trail almost 3 miles long. The trail also features a river and is used mainly for hiking as well as fishing.

Both routes are best between April and October, and you can bring along your dogs as long as they are kept on leash.