Famous for its loud, cheerful chirps, the Western Meadowlark (Sturnella neglecta) is Montana’s state bird. The Meadowlark has been the state bird of Montana since 1930, when school children overwhelmingly picked it to represent the state.

This bird is easy to spot due to its bright yellow breast and a black V-shaped bib on its neck. However, you don’t have to rely on colors to identify the Wild Meadowlark. Loud chirps full of warbling whistles tend to emanate from the Meadowlark. 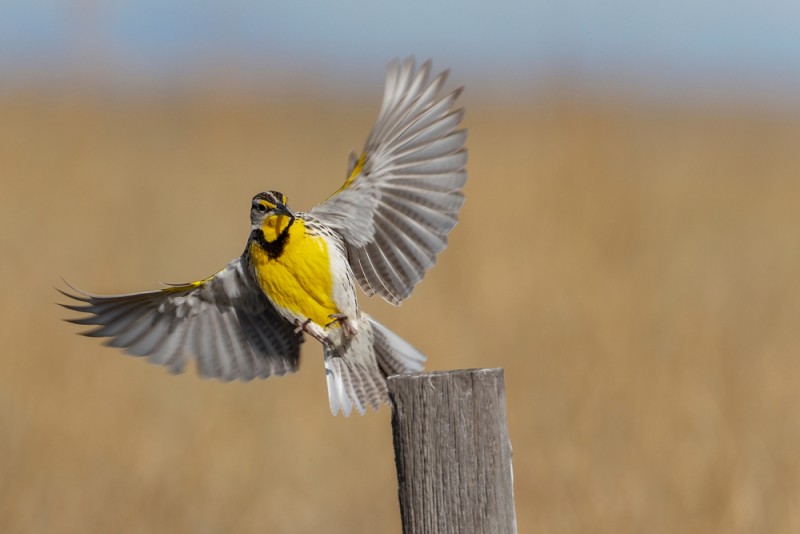 When Did the West Meadowlark Become the State Bird of Montana?

The Western Meadowlark officially became Montana’s state bird in March 1931. It was adopted after the state’s schoolchildren unanimously voted it as their chosen state bird.

The Meadowlark has been gracing the Big Sky Country since the 1800s. On June 22, 1805, Meriwether Lewis, the discoverer of Bitterroot, detailed in his journal about a yellow-breasted bird with a black spot on its neck.

The bird had the appearance of an Eastern Lark but had a varied chirp. Based on these traits, Lewis had spotted a Western Meadowlark.

How Can You Identify the Western Meadowlark?

Montana’s state bird has a yellow belly and a black V shape on its neck. The rest of its body is brown with black streaks. Western Meadowlarks are short-tailed with a flat head. Their long, slender beaks are perfect for eating insects.

Non-breeding adults are heavily streaked and have a faint brown V on their neck region.

This mid-size bird weighs approximately 4 ounces and has a body length of about 6-10 inches. Its wingspan is 16 inches.

Besides its appearance, this terrestrial bird has a unique song. Its song is about a ten-tone melody that diminishes to three tones at the end.

Where Does the Western Meadowlark Spend Much of Its Time?

Montana’s state bird spends much of its time in grasslands, borders of roads and croplands, alfalfa fields, and any open space.

They prefer medium-sized grass with a light cover. If they aren’t foraging on land, you’ll find them perched atop poles, fences, or telephone wires.

Western Meadowlarks build their nests on the ground. Males are territorial but can welcome one or two females to their nests. The birds are permanent residents, with occasional migration.

What Does the Wild Meadowlark’s Diet Comprise?

Small insects are a staple for the Western Meadowlark. Examples of these insects include:

The Meadowlark primarily feeds via gaping. Adults use their robust bills to pry apart grass clumps and reveal insects. These birds feast on grains, berries, and weed seeds, apart from insects.

They mostly hunt for food solo, unless it’s winter.

How Do These Birds Breed?

Although males are serially monogamous, they can have two families at a go. During the breeding season, males breed with two partners.

Each female lays 3-7 eggs and incubates these eggs for two weeks before hatching. Adult males are responsible for hunting for food and protecting the nests during this period.

How Do Western Meadowlarks Behave?

During winter, you might spot them in flocks. Their flight patterns comprise brief sailing periods, then perching on poles or landing on the ground. These birds are low flyers.

Western Meadowlarks are active during the day and move into cover at night. Since they’re ground-dwelling birds, they must remain silent at night to ward off predators.

Does the Western Meadowlark Have Predators?

Because of its medium size, the Western Meadowlark has plenty of predators. Canines like raccoons, skunks, weasels, and coyotes hunt and eat this bird.