When heading to Glacier National Park in northwestern Montana, you can only expect to see a few glaciers while there – it’s in the name, after all.

What would this national park be without its eponymous mountains of ice and snow? Well, thanks in large part to a warming planet, this park – and our world’s – ice glaciers are significantly shrinking in size.

While this may be concerning, this article aims to relate the many glaciers still found in this beautiful state park, their history within the park grounds, and – perhaps most importantly – how to support park rangers and scientists in ensuring these massive landmarks remain for future generations.

We’re going to share some of our favorite glaciers in Glacier National Park, from how to get there to specific stats. Let’s go! 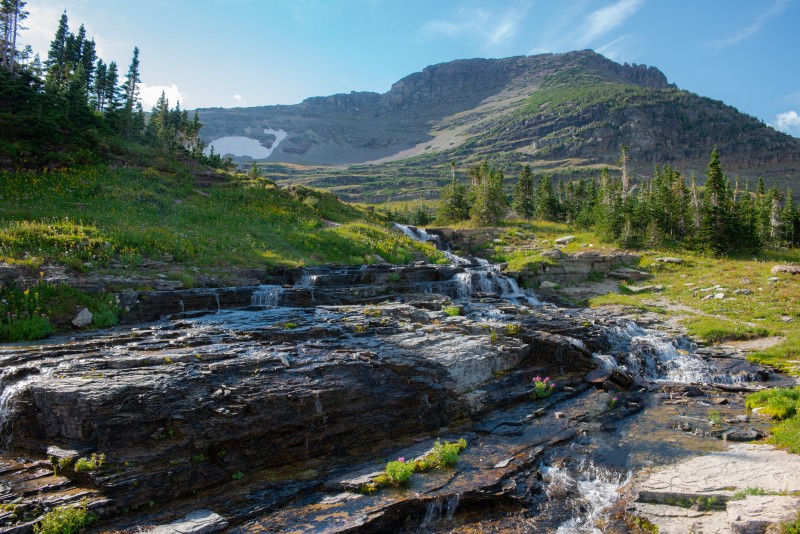 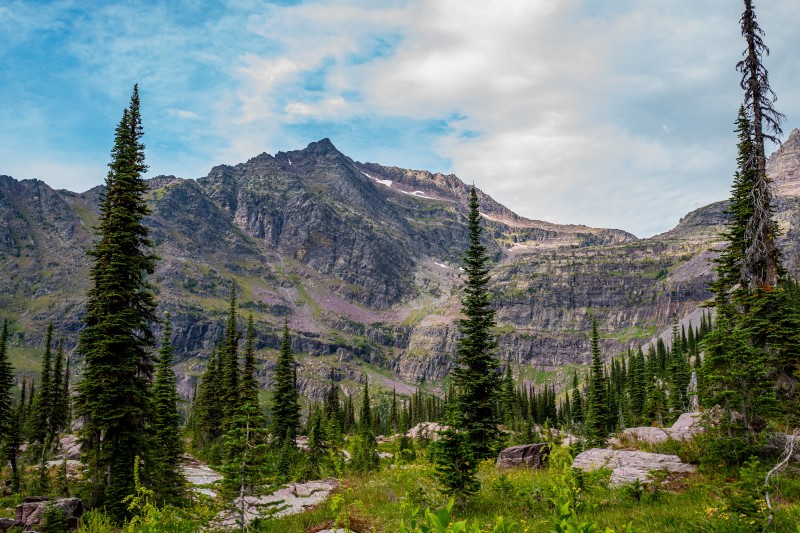 Storytime: glaciers once covered much of the Earth, both during and after numerous Ice Ages our world has known. But glaciers have been present within current-day park grounds for nearly 6,500 years – wow! – and carved out due to weather patterns, glacial growth, and subsequent recession.

Even further back than the Little Ice Age glacier event – not a full-blown Ice Age, but definitely cause for a winter jacket – this national park was almost entirely covered in ice around 20,000 years ago. That number may be hard to grasp, but just imagine all but Glacier’s tallest peaks covered in ice and chilling snow. It truly would have been a sight!

The land that now encompasses this national park was ushered into the national conversation in the 1850s, when adventurers began charting and exploring the terrain, including its glaciers. But evidence of human use in the area dates back to around 10,000 years ago, inhabited long before European settlers arrived.

While the indigenous tribes of the area – Blackfeet, Kootenai, Salish, and their ancestors – have faced tremendous cultural loss by losing this land and its glaciers now claimed by the National Park Service, it is up to all of us to ensure their culture remains intact with the land. How does this relate to the park’s glaciers?

In order to understand the park’s glacial history, we have to contextualize the people who utilized this land for ceremonies, fishing, and more. They, too, provide insight into these great glacial masses.

What Kind of Glaciers Are in Glacier National Park? How Many? 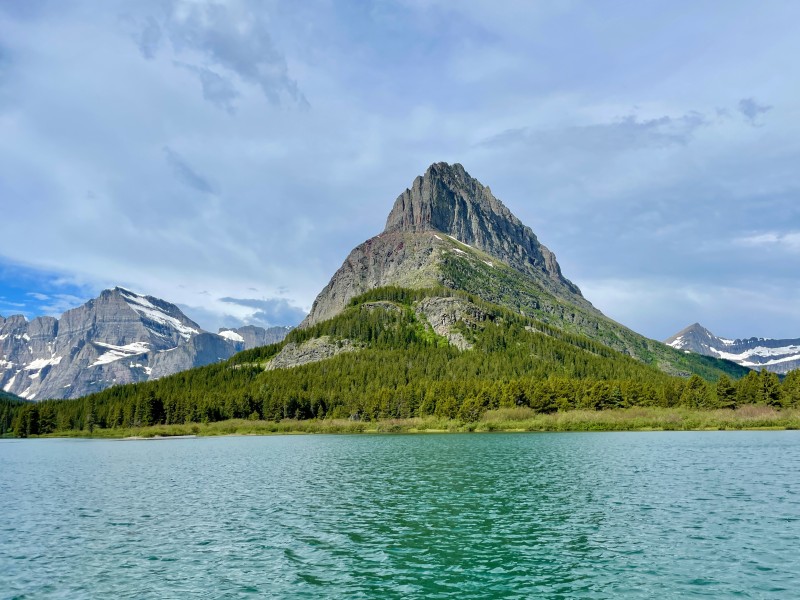 While you can imagine that the national park had numerous glaciers at different points in the world’s history, we currently have 25 ice glaciers and closer to 13 rock glaciers. And the glaciers visible today are only remnants of larger glaciers of the past; in 1850, the park counted at least 150 glaciers. That’s quite a shift, isn’t it?

And what’s the difference between an ice glacier and a rock glacier?

Ice glaciers are typically composed of compressed ice and snow – no surprise there! – and some of these have been around since the last ice age cycle. Ice glaciers are so large that they can move under their own weight, but once they move, they create rock formations and glacial lakes.

Then, as the glaciers retreat – something you may be seeing a lot of – they leave behind moraine, or a mass of rocks, soil, and sediment deposited by a glacier.

In fact, moraine landscapes can be found all over the world! In comparison, icebergs break off from glaciers or sheets of ice, but rather than being entirely exposed, only the tip is seen while 90% can be found underwater – Titanic style. Looks can be deceiving!

What’s a rock glacier? Rock glaciers are distinct geological landforms made from large, angular rocks that may have ice in their nooks and crannies. Likewise, they could also be a mass of ice covered by rock debris, but rock glaciers typically have very little viewable ice – and that’s the main difference.

One more thing: while glaciers don’t create – or turn into – mountains after ice melts, they can, in fact, erode mountains, forever changing landscapes over time.

Are the Glaciers in Glacier National Park Shrinking? 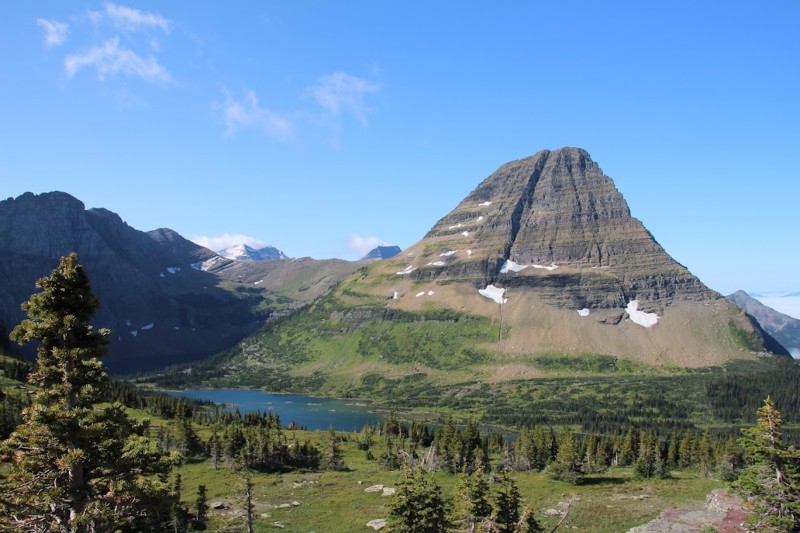 All you need to do is look at the numbers from 1850 to the current day to see that we’re gonna need a bigger life raft for this one.

Unfortunately, glaciers here have been rapidly shrinking – as with the North Pole, Antarctica, Alaska, and more – and scientists suggest that by the year 2030, there may be no more glaciers left at this park.

Although all glaciers here are getting smaller, variations in ice thickness, avalanches, and more can cause some to shrink more rapidly than others. As summer melting clearly outpaces winter snowfall, the math equation adds up to our current state.

We know that glaciers around the world have fluctuated continuously, but recent decades attribute the glacial loss to anthropogenic causes – in other words, humans.

Glacial melting has contributed to rising sea levels, and our human activity hasn’t been making matters much better. Coastal areas in particular can be affected by these sea level advances, and while we’re landlocked in Montana, scientists maintain that everyone can do their part to slow the melting rate down.

So, how can we help?

The top thing we can do is become informed, especially as folks may crowd Glacier National Park to witness glaciers before they melt. Using solar energy when possible, reducing water waste when bathing or brushing teeth, turning off lights when not in use – all of these things add up, along with advocating for renewable energy resources.

But the most important thing to note is that each one of us can play a role in slowing down the effects of a changing planet.

Which Are the Largest Glaciers in Glacier National Park? 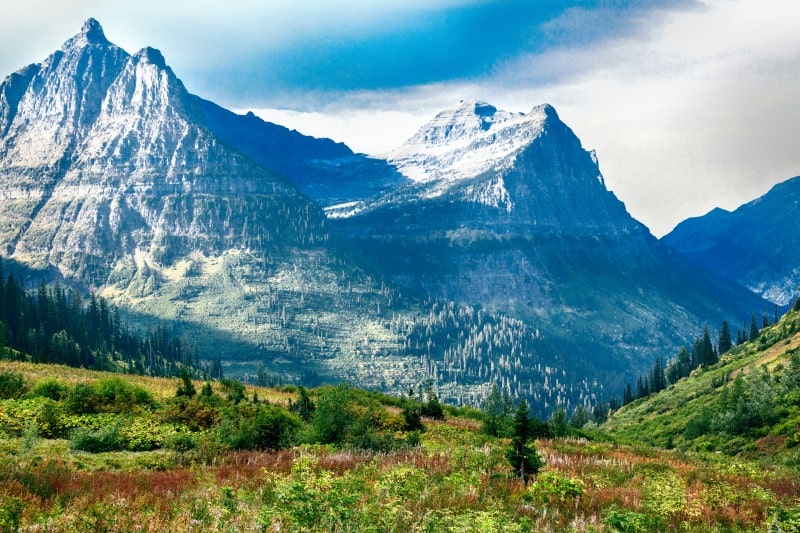 Let’s lighten the mood a bit and talk about some of our favorite glaciers still here. Some glaciers can be seen from a car ride – perfect for wheelchair users – but we want to highlight the largest and most impressive glaciers in the park. Most accessible? We’ll get to that later.

Although it’s certainly experienced its own glacial loss (thanks, climate change!), this massive 410-acre glacier is so monumental that it’s one of the few exceptions to the gulp-worthy 2030 acknowledgment.

The largest remaining glacier in the national park, there are a couple of easy ways to view Harrison Glacier: via Dawson Pass Trail and Dawson-Pitamakan Pass Loop Trail.

But if you’re looking to cozy up with its glacial meltwater, we recommend trotting around Harrison Lake, which has its own nearby backcountry campground with three sites. You’d think Harrison would be well-populated by tourists, but it surprisingly allows for solitude and a nearby strenuous hike.

Best viewed via the Gunsight Pass Trail, this glacier has been extensively monitored and researched via the U.S. Geological Survey’s Glacier Monitoring Research Program – you can imagine why.

Similar to Harrison, it has a longer expiration date than most of its smaller cousins due to high accumulation snowpack rates, but this beauty just north of Blackfoot Mountain certainly is not invincible to change.

As you can gather from the name, this area holds immense cultural and spiritual significance to its indigenous forebears and should be treated as such.

Where to See Glaciers in Glacier National Park 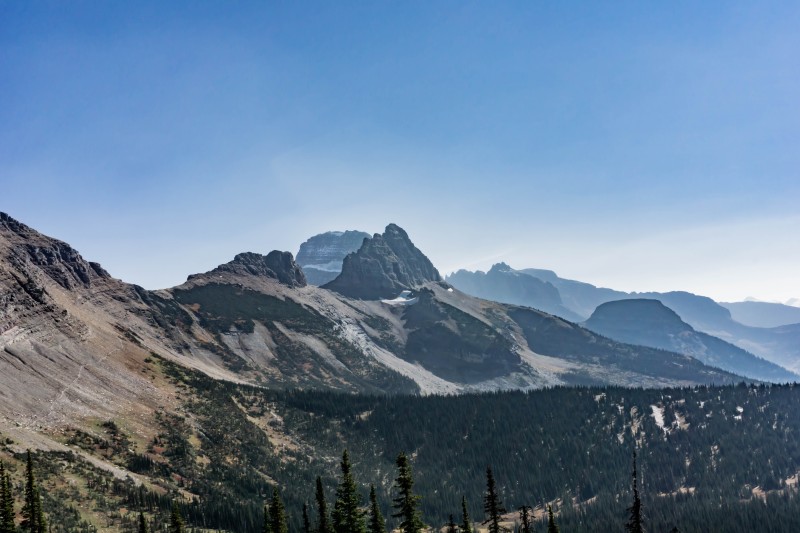 While many of the park’s glaciers are tucked away into well-concealed hiding spots, not quite accessible for a day hike, Jackson Glacier is the most accessible to any passerby traveling along the Going-to-the-Sun road.

Even as the seventh largest glacier in the park, it’s still monumental in size and equally as breathtaking as Hamilton or Blackfoot.

Once you get to the Jackson Glacier Overlook along the main scenic byway, get out and take a few photos of this beauty.

After a restorative stay at Many Glacier Hotel, follow Many Glacier Road until you get to the main scenic byway. Salamander is highly visible from the road, sitting across 42 acres in a basin just above Grinnell Glacier.

If you’re hiking the Highline Trail, push through any discomfort near the Garden Wall, because the reward is a fantastic view of Salamander Glacier and Grinnell Lakes.

Once one of Glacier’s largest landmarks, Sperry Glacier has ceded around 75% in size since the mid-19th century. (Yes, 75%!) Along the northern slopes of Gunsight Mountain, it takes a pretty significant hike to get here from Lake McDonald Lodge and its enormous lake.

If you’re okay with making a 5,000 foot elevation change, this is the hike for you. We recommend hiking up to the historic Sperry Chalet for one night before making the trek up to the glacier – it’s worth it.

Named for American conservationist George Grinnell – a strong advocate for the national park’s creation – this glacier is easily one of the most popular in the entire park. But popularity doesn’t take away from its quality, although we’ll be the first to say it’s experienced a dramatic decrease in glacial activity over time.

While the 10-mile round trip hike isn’t for the faint of heart, it leads to turquoise blue glacial waters and a perfect picnic spot. Starting either at Grinnell Glacier Trailhead or via a boat ride from Many Glacier Hotel, this hike takes time and patience!

Found off the beautiful Siyeh Pass Trail, this glacier covers a little under 70 acres and has lost more than 25 acres in areas since 1966.

While we’d only recommend the treacherous 10-mile hike to the glacier to confident hikers, thanks to some grueling switchbacks, the hike is absolutely gorgeous – waterfalls, wildflowers, scenery changes – and provides a seamless view of Sexton Glacier from across the way.

An undiscovered gem, this is the best path to get to Sexton Glacier!

While climate change certainly plays a role in the cumulative shrinking of this park’s beautiful glaciers, there are still so many reasons to visit Glacier National Park – from its rich history and numerous lakes to its campgrounds and expansive sights.

Have you been to Glacier National Park, and do you have a favorite glacier? Let us know!