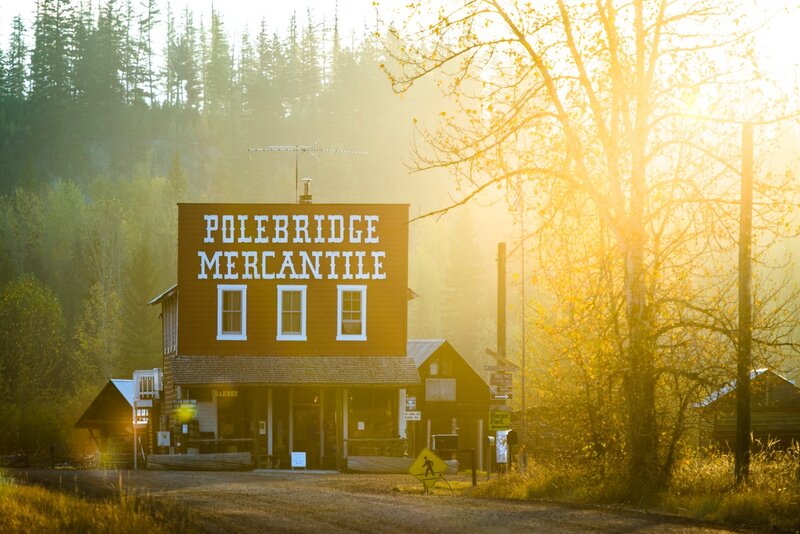 In this article, we take a look at the wonderful activities, sights, and things to do in Polebridge, MT, in Flathead County.

Forget the beautiful scenery and aversion to electricity – The Polebridge Mercantile is what really puts this little community on the map. You simply can’t visit the North Fork area without a stop at this famous establishment.

Given its importance to the local community and iconic status in northwest Montana, it feels a disservice to call the Polebridge Mercantile just a store. Founded in 1914 – making it nearly as old as the Glacier National Park itself – the Mercantile & Bakery has been serving the locals (and thousands of wandering travelers) for over a hundred years.

The ‘Merc’, as it is affectionately known, is the ultimate one-stop supply shop for people traversing the remote wilderness of the North Fork area.

The shop caters to everything from gauze and parachute cords to regular groceries and souvenirs. It has to, as Polebridge, sitting at the end of a road which is little more than a dirt track, is the last frontier for people exploring the north of the Glacier National Park – there’s not another town for miles.

Ignoring the practical elements of the Mercantile’s significance and popularity, here is the real reason: the bakery. And more importantly, the huckleberry bear claw. It is no exaggeration to say that people come from far and wide to visit Polebridge just to try the iconic – and delicious – bear claw.

It’s not the only thing the bakery sells, however! You can smell the sweet treats and pastries before you even set foot in the building – they’re baked on site every day during the summer.

2. Rent A Cabin And Escape Into Nature

Known as one of America’s last outposts, Polebridge is a rare entity in the 21st Century; it’s almost entirely self-sufficient.

The town is quite literally off the grid.

Electricity is an afterthought here – sparingly used, and little needed. Any power Polebridge requires is sourced from a mixture of their own diesel generators and – increasingly – solar power. There’s no cell service, and no wifi; for some, this may sound like a 21st Century nightmare. For most, though, this is a blessing. An excuse to ignore the outside world for a while, embrace nature and enjoy the company of your fellow man without distraction.

Staying in a log cabin in Polebridge allows you to experience this simpler way of life firsthand, if only for a short while. You can enjoy a rustic, homely cabin while imagining a time where this bare bones, salt-of-the-earth style of living was the standard.

The lodges make a great base – not only are you briefly a part of the lovely and welcoming Polebridge community, you are also perfectly located to explore some of the stunning scenery that surrounds it. Start one of the fantastic hiking trails from town, or travel a little further afield to the Glacier National Park; either way, it is a phenomenal place for an escape into nature.

Montana is a state blessed with more than its fair share of natural beauty. It’s lucky enough to be home to not one, but two of America’s most beautiful national parks. While Yellowstone and its tumultuous geysers and dramatic geological marvels sits to the south of the state, the Glacier National Park occupies much of the north.

Formed over a hundred million years ago, the geology of the park is a testament to the slow patience of nature. The beautiful scenery is a result of dramatic geological changes long in the past. What is left is one of America’s most spectacular areas of natural beauty.

The Glacier National Park is all snow-capped mountains, pristine lakes, and lush pine forests. The Going-to-the-Sun Road is one of the most famous in all of America for a reason – it is a breathtaking route winding between the steep valleys and alpine forests of the Rocky Mountains. Polebridge is closer to the lesser-visited northwestern side of the park, which is equally picturesque, but quieter.

Polebridge is on the doorstep of Bowman Lake, a particularly beautiful spot in the park. You can swim, kayak, and snorkel around the lake – or use the campground facilities, which make it a pretty popular area for families!

There is also the lovely Kintla Lake, though this is harder to access due to poor roads.

Read more: Where To Stay In Glacier National Park, Montana

In this remote corner of Montana, it’s practically a rite of passage to stop at the Northern Lights, enjoying a warming drink under the North Fork night sky.

Like the rest of Polebridge, the saloon has no cell service and no wifi – the constant barrage of information and distraction whittles away into nothing here. You are surrounded only by nature, in the company of great people, and with delicious food and drink on hand. The saloon has a lot of character – a real rustic charm that has lasted since its inception in 1916.

You can hear live music at the Northern Lights Saloon every week during the summer, from 6-9 pm. After years of performances and surging popularity, the Polebridge Stage has become an iconic part of the community.

Home Ranch Bottoms is the only other restaurant in Polebridge and serves up “traditional American fare with flair” in a rustic setting typical of the town.

Free Things to Do in Polebridge, Montana

There are a number of fantastic hiking routes and trails around Polebridge, but the most famous – and unusual – is probably the Transboundary Flathead River Interpretive Trail.

The 25-mile long route crosses the border into Canada and runs through the Glacier National Park. Much of the hike journeys alongside the crystal clear waters of the North Fork Flathead River, for which the trail is named.

While there are lovely views of the Glacier National Park, Rocky Mountains, and alpine forests, the Interpretive Trail is set apart by the wealth of information dotted along the route. There are multiple signs detailing the history of the area, as well as geographical facts and information about the local ecosystem.

The Interpretive Trail was a project created to honor the partnership between the U.S and Canada, and the efforts of the local people on both sides of the border to preserve the area. As you will learn on the trail, the North Fork area wouldn’t be the same without them.

Polebridge is about as wild and remote a place as you can expect to experience without completely abandoning human civilization. There’s a reason they call it the last frontier. With more bears than humans for company, limited use of electricity and absolutely no street lights, Polebridge has managed to avoid keeping pace with the rapid modernity of the rest of America.

One of the benefits of this is a peaceful, relaxed community truly in touch with nature. Another is an astonishing lack of light pollution. Where the skies above America’s sprawling towns and cities look dull and sparsely populated – if you can even see the stars at all – the skies over Polebridge and the Glacier National Park are a vivid mosaic of galaxies and nebulas.

The constellations dance across the night in incomprehensible numbers – the complete darkness of the North Fork area gives you an unparalleled view of the stars. It’s the perfect place to wrap up warm, sit outside, and gaze up into space – all while surrounded by the natural beauty of northwest Montana.

On a clear night, you will be able to spot everything from Orion and the Big Dipper to the dimmer constellations usually hidden by light pollution.